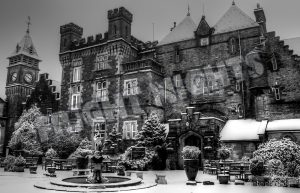 Craig Y Nos Castle may be nestled in one of the most beautiful and idyllic settings in the upper Swansea valley of the Brecon Beacons National Park, BUT DON’T BE FOOLED! Craig Y Nos is reputably one of the most haunted Castles in the country with supernatural occurrences continuously being experienced and reported by staff and guests of the Castle. It appears that some of the past residents loved the place so much that even after death they still reside within the walls of Craig Y Nos!

Fright Nights Wales have hired the castle for the entire night and we would like you to join us at possibly one of the most haunted locations we have ever investigated! Some of the paranormal activity that occurs here is that of voices being heard… frequently said to be children chattering, laughing and singing. Dark shadow figures have been seen and full apparitions, including the white lady that’s been seen on the staircase leading to the Theatre. Objects moving without known cause is a phenomenon that’s widely reported, meaning we could experience poltergeist activity during our stay. There are areas where people have felt unusual sensations, and certain parts of the building are said to have an oppressive atmosphere. We feel this would be an opportunity too good to miss as we get right in the thick of it and try and communicate with the spirits at Craig Y Nos.

3pm      Check in… Cost is based on two people sharing a double/twin en-suite bedroom (A single booking can be made but it incurs a single occupancy charge) It is ok to arrive earlier than 3pm however your room may not be ready.

10.30 am      History tour by Craig Y Nos staff… when we will be able to confirm any of our findings from the ghost hunt the night before?

11am      Checkout (please checkout before the history tour)

Craig Y Nos is a gothic style Castle of the Victorian era, built in 1842 by Captain Powell and was originally called Bryn Melin. It was said that the Powell family were cursed! His youngest son passed away in 1851 from cholera. His wife and daughter also died before the Captains death which was in 1862, and 2 years later his eldest son was killed in an accident. The estate was left to his eldest daughter who sold the property in 1876 to the Morgan Family.

The building was re-sold yet again in 1872, when the world-famous Italian soprano Adelina Patti took possession. The building was extended with the grand theatre being added for Adelina to perform private concerts. She appointed the name Craig Y Nos which means “Rock of the Night”. She was quite a character, often being described as flamboyant and fiery in nature. She lived quite an extraordinary life, with an achievement of 30 gramophone recordings of her opera songs. She was a popular lady, often known to throw lavish parties at her home. There’s a sad ending to Adelina’s story as in 1919 she fell down some stairs at her beloved home and died instantly. Her body was embalmed and kept temporarily in the cellar. She had requested that upon her death she be buried close to her favourite composer Gioachino Rossini at Pere la Chaise Cemetery in Paris. Her request was fulfilled although the Italian government have since relocated Rossini’s remains to Florence and now she is companionless. Is this why she is thought to still be present at Craig Y Nos? Could it be that although she had such a wonderful life, in spirit she is full of sorrow? Many people are thought to have encountered Adelina Patti over the years. Between 1920 and 1960, Craig Y Nos became a tuberculosis sanitorium for children. This was a medical facility for long-term illness before the discovery of antibiotics. During this time the children often witnessed “The White Lady” who sometimes appeared at the foot of their bed, or they would hear her singing echoing in the corridors.

The sightings still continue to this day!

Fright Nights Wales have hired Craig Y Nos overnight for a very exclusive ghost hunt. The night begins with dinner followed by a five-hour long ghost hunt! You will be joined by experienced paranormal investigators and mediums to try and experience paranormal activity in one of the most haunted buildings in Wales. Full use of ghost hunting and psychic equipment will be provided as well as hot refreshments throughout the night. Bed and Breakfast is included in the price, and a History Tour before you go home!

Please note: Over 18’s only and NO pregnant women allowed as per our insurance cover. Venue is usually unsuitable for disabled guests due to the nature of the buildings, but if in doubt, please contact us for more information. NO accommodation is provided unless specifically detailed. For more information please see our full terms and conditions here. All our events are fully insured, and a First Aider will be present. This event is organised by Fright Nights South Wales.

TO BOOK THIS EVENT WITH A GENUINE FRIGHT NIGHTS VOUCHER, PLEASE CONTACT THE ORGANISING FRANCHISE BELOW, WITH YOUR VOUCHER SERIAL NUMBER AND ALL CONTACT DETAILS, INCLUDING MOBILE NUMBER & EMAIL. THIRD PARTY VOUCHERS ARE NOT ACCEPTED FOR THIS EVENT!

With thanks to Gemma Snow of Fright Nights Cambridgeshire for the Research & Detailed Write-up for this event.